Skulls for partying: Celebrating the Day of the Dead 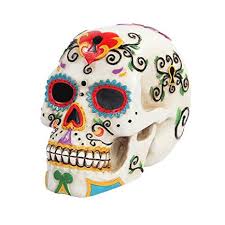 When Richard and Judy visited Mexico during late October, they were struck by signs of coming festivities everywhere: paper and foil decorations and an air of holiday excitement and fun, and shop windows full of … painted skulls

It seemed a strange combination of merriment and macabre.

It was preparations for Dios de los Muertos, Day of the Dead, a holiday that combines the Christian All Souls’ Day with the traditional belief that a family’s loved deceased can return to earth on the day set aside for visiting with them.

The celebration’s eve and first day, October 31 – November 1, are when the spirits of departed children return. They are made welcome with “altars” created in the homes with flowers, food, candles, small toys, and other gifts.

The second day of celebration, November 2, is the time when souls of  departed adults  return. In homes and communities that are more heavily influenced by European traditions, this may be observed with quiet family gatherings and especially with time spent caretaking gravesites and cemeteries.

Other communities celebrate with big parties, lavish meals, music and drink. Like many villages, Mexico City hosts a large parade. It’s an official holiday and people enjoy the break, the special foods, and the feeling of excitement and celebration – quite a change from the “gringoes’” traditions of solemn mourning for the dear departed and fear of ghosts and spirits!

The Weigands especially noticed the Mexicans’ use of skulls and skeletons in decorations, costumes, and in candies meant for display as well as eating. This symbolic use of decorative skulls got its start more than a thousand years ago, in the rituals and beliefs of  Aztec and other native peoples. Later, Catholic missionaries used small statues to depict their religious stories and celebrations. Beautifully carved or modeled from fine clays, these icons helped convey Bible stories’ meaning to the native congregations.

Without access to expensive materials or sophisticated training, native artisans used a readily available material – hardened sugar – to create icons of their own mythology blended with Christian ideas.  Placed on the home altars, colorful candy skulls are seen as invitations welcoming spirits and angels. They represent the return of deceased family members, an important and beloved concept in tribal belief systems, combined with the Christian belief in life after death and the resurrection of Christ, all coming together during Dios de los Muertos.

Vibrant, colorful art; grinning faces; happy hopes of life continuing after death; and a most down-to-earth feast and drinking party: who could ask for more in a holiday? And who could resist a different kind of invitation the skulls seemed to make…

Richard is inspired by the ideas and artistry of these traditions to create a line of handcrafted wooden skulls. These include stand-alone objet d’arts and wooden skull jewelry, in various native hardwoods and in an array of sizes.

It’s like offering smiles, art, and history in one sleek package.